Sorry for the delay in posting folks. I had written 80% of this post on my phone. If you keep reading you’ll find out the fate of the phone. Since I cannot recover the post I had written previously I had to rewrite. Also ongoing apologies for lack of photos. In El Chalten internet is via satelite as there is no fibre optic connection for the town. It is worse the days of dial up internet… Once we get further north we will post photos retrospectively. Sorry!

We left Puerto Natales by bus with all our gear and bikes ( each sporting a hiking pack, 2 rear panniers and a rear rack pack of stuff) for El Chalten stopping briefly in El Calafate to change buses.

When we arrived it felt like a new place as the sun was shining and the mountains were on show! Last time we visited this town it was cloudy, windy or raining at all times. We spent the next day hanging out at the Cerro Torre lookout taking in the scenery. It is an amazing place. Pictures do not fully capture the scale of this place. Upon return to town we sampled the local beer and hatched a plan to start the Huemel circuit the following day. The good weather should last another day at least we thought. We returned to camp and repacked/resupplied.

The following day we headed off the complete the Huemel circuit. We were held up at the parks office in a steel vs aluminum carabiner debate. It was unsolved and we disappeared onto the trail without permits. We hiked through the forest and open valley to Lago Toro. From here the walk got interesting. Crossing the river via a tirolean traverse ( a steel cable bolted over the dangerous river crossing with a pulley on it, you wear a harness and clip into the pulley and pull yourself across the river) which was positioned with a slight incline in the direction we were travelling! After hauling ourselves up hill with heavy packs on our backs we scrambled up the hill side and onto a glacier. After crossing the glacier and scrambling up the next hill we came to Lago Tunel. I believe it is named so because of the wind tunnel effect here. Cooling air over the glacier above and a glacier below must create some microclimate effect because the wind was pumping! We rock pegged out our tent in the gravel camp site and tried to sleep. I am completely unable to sleep in windy tents. So I read a book for most of the night.

Early in the morning we got up ( ironically the wind had eased at this point) and walked up and over the mountain pass aptly named Paso del Viento (Windy Pass). As with all other mountain passes we have completed in Patagonia we received ice bullets to the face heading into the wind.  But our consolation prize was a view of the southern ice field. Chris has pointed out it is not an ice field/cap as its only 13000 sq kilometres and needs to be at least 50,000sq km to count. It is still massive!! Ice as far as you could see in all directions that did not have a mountain in the way.  After going through the pass we dropped down to calmer ground we skirted around the ridge passing the Paso Del Viento shelter and continuing on until rain stopped us. All the while terrific views of the southern ice field and glacier Viedma were to our right. We found a sheltered campsite and made hot chocolate.

The following day rain continued but only lightly and winds had dropped a lot overnight. We continued to circle Cerro Huemel (Cerro = Mountain in spanish) and climbed over Paso Huemel to gain views of the Viedma Glacier terminus. The track then turned downward into a mud slide all the way until you hit the shores of the Viedma Lake. We continued a short way in the valley heading back to town before camping for the night.

The wind had been calm at the time we went to bed but turned into a violent rage by 12am. Hilary could not sleep and so at 5am woke Chris and they walked back to town through valley and fields. The walk had been beautiful and isolated. The track was well formed in parts and near non existent at other points. Best of all we had not seen anyone from Lago Toro until returning to town! After the chaos of Torres Del Paine and crowds at the Cerro Torre lookout it was great to get some peace and quiet.

Back in town we feasted on cheesey balls ( “chipa”) and pastries. We then had the fanciest meal of the trip. We went out and enjoyed housemade ravioli and gnocchi and a chocolate volcano for dessert. After two days of admin and cleaning we felt ready to take on another challenge. This time we selected a circuit of the north part of this park which involves a traverse across the southern ice field. We packed 8 days of food, crampons, ice axes, rope and mountain boots.

The following day we rode 15km north of town with all our gear. Stashed the bikes in the trees and walked in through the valley towards the Marconi Range/Glacier. After a rather wet river crossing of Rio Pollone ( I fell onto my knee and pulled Chris with me, such that Chris was sitting on a rock in the river as my anchor whilst i got back onto my feet) , we made camp by Lago Electrico. I discovered at this time that my phone had been in my pocket in the river crossing and was now soggy!

We woke to light rain and cloud, we tentatively made our way towards the terminus of Glacier Marconi. It took some time to navigate our way onto the glacier from the southern edge but then found the terrain quiet easy until we had to take a hard right. The glacier must have seen better days and now is not in as good condition. After a moderate climb on snow and ice once again you navigate around some seracs to exit the glacier onto the rock buttress. Rock scramble up the buttress and back onto the glacier. Finally a long trudge along the glacier to reach the Paso Marconi. From here we could see the refugio on a rocky knob 1-2 kilometres off course. Tired and not keen on making ice walls to protect our tent from winds on the pass, we shuffled over the hut. Here we met 2 Germans with their guide who had essentially started only 30 minutes walk from where we had started. They took 7 hours to reach the hut where we had taken 12… After a short discussion it became obvious they had taken a different route. ‘Did you take the tirolean traverse?’ They asked. ‘There is a tirolean in the valley?” We responded. It turns out a tirolean had been installed after the glacier had become too difficult to guide people on, such that you can rock scramble up a rock gully and reach the pass without the technical ascent of the glacier. I am still glad we got go the way we did. The hut was placed in the most spectacular spot with mountains of every side and the southern icefield on view from the kitchen window.

The next day we recovered at the hut, slept in and started to lighten our packs by eating food! The following day was rain and low visibility so we stayed a second day in the hut. After two days of lazing about broken by trips outside to see the views every time the clouds parted it was time to make a move.

At 5.30am we set off to traverse the southern ice field! Distances seem so massive when you can see so far in the distance. After a few hours of walking on the snow covered icefield we could see all the way to the end point of our days walk ( that day we would cover approximately 25km!). We passed the west faces of the Marconi and Torres Ranges. Cerro Torre was cloaked in to clouds and only parts but not the whole mountain cleared into view during the traverse. Even so the parts we could see were amazing. The ice mushrooms! There is a unique ice formation in this area due to the crazy winds blasting the mountains with ice (rime) it gets piled on top of the mountain creating these mushrooms of ice! We walked until we saw the land formation that the map indicated was where we exit the glacier. When we arrived we realised that it was not so simple as stepping off ice onto land. After a brief wander around the seracs of the glacier we found a spot to build a snow cave to camp in for the night. The wind had long passed gale force and there was no great places to pitch a tent. After 2 hours digging the cave with ice axes and pots ( no snow shovel). we had built a space just big enough for the two of us. Just. We crawled in and used a bag to partially close of the gaping hole of an entrance we had built. (ideally one would make a cave with a smaller entrance and the room further in from the outside to protect from wind and rain/snow but we had not the time).

We slept a little whilst the wind outside made these sonic boom noises as the gusts picked up. It was like a car backfiring but lower key and more bass added. In the morning we woke to snow flakes drifting into the cave from outside. It was cold! Dressed in thermals (top and bottom) and down jacket plus waterproof shell jacket and pants I packed up our gear whilst Chris scouted around the rock gully near camp to see if we could scramble our way on rock rather than on the seracs of ice. He returned with success! A short fixed rope in a rock gully leading to a moderate section of glacier terminating at the lake where the track starts! We had slept the night only 500m from where the track starts. We scrambled with our packs in the wind and snow to the fixed rope and slowly rappelled back onto the glacier and walked over to the lake. By this time it was lunchtime! We picked up speed on the rock/ground as we climbed over ridges to Paso del Viento and reversed the path we had completed on the Heumel circuit. We made great time all the way back to Lago Toro where there are trees for a protected campsite! We made a late dinner and slept in.

We debated if we should continue to town, stay the day and rest or climb another pass towards Cerro Torre. The clouds were low and we decided to return to town. A 6 hour walk through the valley with grass and trees was such a change from the previous few days of walking!

On return to town we booked our tickets north to the sunnier lakes district of Agentina where we will swap crampons for wheels and cycle again! El Chalten certainly lived up to its reputation of wild weather. Snow, rain, wind, sun, poor visibility and clouds all of which at some point was featured in our visit. 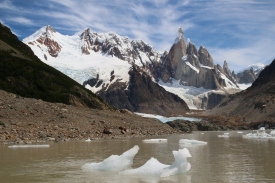 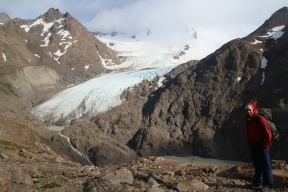 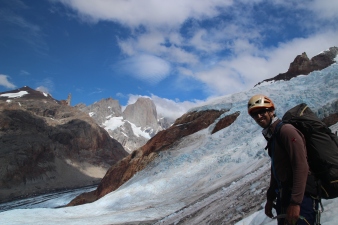